After finishing this Ironman race last year, I was back in Cozumel again to try and beat my time of 2011 time of 14 hrs. 4 mins and 7 sec. And with much pride, I am happy to announce that I did. My finishing times were 13hrs, 50 mins, and 27sec.

Ironman competitions are always very challenging, both physically and mentally. My day began at 4 am when I awoke to have breakfast. After getting to the transition area and re-checking my bike several times, I was ready to go. I then went down to the beach to begin the race with over 2300 swimmers (1700+ men and almost 600 women) from over 42 countries.

Once again, it was a beautiful day in Cozumel.  The air temp about 74 degrees, with clear skies and not a cloud in sight. Now, after all the months of training, this journey was about to begin. 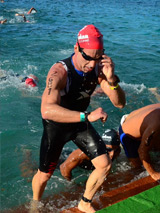 THE SWIM IN IRONMAN COZUMEL

The water was a bit choppy, and there was a strong current too. This did not bother me as swimming is my best event.

The current would be flowing against us for the first 800 meters.  So it was best to be close to the shore where the current is less. After treading water for 10 minutes or so, the horn went off. I go pretty fast at first to get away from the crowd.

Due to the chop, I altered my stroke by bringing my arms closer to my body a bit to clear this.  It caused me to develop a bit of an underarm chafe, but this was soon forgotten. Once we turned around the first buoy, the current was with us. And then I could let the current work with me for the next mile or so.

The water here is so clear. Schools of fish are visible swimming around. And so are the scuba lifeguards that are positioned on the bottom about 30 feet down. When I got to the final turn, the current was against me again. I had to work a bit harder.

No balloon or marker was marking the pier. So I just followed the crowd and sighted off the lifeguard paddlers and boats. Overall I was about 8 minutes slower than last year (one hour and nine minutes this year). But I still felt pretty good.

Later, I was to learn that most people were 15 to 30 minutes slower than last year. In Ironman races (avg. participants about 2300), there are usually about 10-15 who do not make the 2 hrs. and 20-minute swim cutoff time. This year there were over 240! Very disappointing for them as they take your timing chip away as you exit the water. Some chose to do the race anyway unofficially.

As I exited the water, I ran quickly into the change tent. I was determined to cut down my transition time this year – big time. I had opted to wear a Tri Suit under the speed suit I swim in (like in the Olympics). This meant I did not have to change into separate clothing for the bike and run since the Tri suit is a two-piece suit that one can ride and run in.

Once inside, I quickly stripped the speed suit off, put on my helmet and bike shoes, and was off to get my bike. There was no need to re-apply sunscreen as they had helpers in the change tent lathering shoulders and upper arms (the exposed areas) with sunscreen. This was a big help. 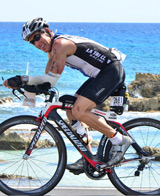 NOW FOR THE BIKE SECTION OF MY SECOND IRONMAN

The first of three loops on the bike went well. Fortunately, there wasn’t a lot of wind when we got to the back of the island. I also had changed my nutrition from last year and did not have the dreaded stomach problems that many triathletes have on the bike.

During the second loop, the winds really picked up. It was a tough 15-18 mile section with 15-20 mile an hour wind hitting broadside. I did develop some left foot pain which sometimes happens when I ride over 70 miles. This had happened last year. So I removed my left orthotic. So I removed my orthotics which essentially eliminated the pain.

At mile 62, there is a special needs station to leave anything you want. Last year I rested there a bit. But this year, I just grabbed what I needed from my bag and kept going.

Then in the third loop, the wind got even more brutal. We were all slugging it out on the backside of the island. As I turned to head back into town at the 100-mile marker, I went to slip the orthotics back in as it prevents me from having foot pain on the post-ride run. The left one had fallen out of my bike jersey pocket, but at least I had the right one. All in all, I rode 12 minutes faster than last year. 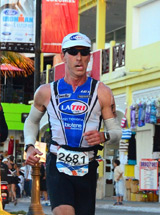 Back in town, I got off the bike to run to the transition area. I quickly changed and headed off to run the marathon. My legs were a bit heavy, but somehow I was running well. This was especially good since I had a hamstring problem earlier in the year. And even had been running a lot in deep water instead of the land for my training. The heaviness quickly went away within the first mile, and all was going well. I had only slight right hamstring discomfort and no real pain.

We do approximately 4. 4 miles out and back for an 8.8-mile loop. The run includes three times around the loop. On the way back to town on the first loop, the foot pain (left and right) started to appear. I did take a Celebrex at 4 am and another one on the third loop of the bike.

When I got to town after 8.8 miles, I asked my good friend Angela (she was my aid throughout the race- and a great one at that) to find ibuprofen (it works on a different pathway than Celebrex). When I got to the second turn around to head back to town (13.1 miles), my hamstring kicked in – big time. It was painful to run, but I kept going. I changed my gait (made it an even shorter stride). There were plenty of people walking by then, but I just dealt with it.

I knew there was a medic tent at about 15 miles. I pulled in and asked for ice. They ace wrapped my upper thigh with lots of ice. This seemed to reduce the pain. But I was still running slightly slower (the first 13.1 miles had me on a 5+ hr. marathon pace – much better than the 5:35 of last year).

As I entered the town, Angela was there and handed me the ibuprofen. I took it, and within minutes I was feeling quite good. Before this, I had calculated my time and distance and knew that I could break 14 hrs. And maybe even by 30 minutes.

But the hamstring pain started to return about 19 miles. I got the leg wrapped with more ice again on the way out to the 4.8 final turnaround. Before the last turnaround, I was forced to walk and run. This is something that I had never done before (walk, that is). But the pain was pretty high.

At the last three-mile marker, I got even more ice for my hamstring and decided to walk more than run. Soon thereafter, I could not continue a run/walk pace due to pain but figured if I walked fast (walking was painful but not severe), I would break 14 hrs. So at that point, I walked a 14-15 mile pace (off my Garmin wrist computer), which is still pretty fast. There were plenty of walkers, and I was passing them.

I had to save whatever run I had left in me for the last few hundred meters up to the finish. No way was I going to walk that! This is right in the middle of the park, and all lit up with hundreds (if not more) of people yelling and screaming. So as I got close, I began to run. Pain is temporary; finishing is forever! I kept going and reached the last hundred meters to the finish line, where I heard the announcer say, once again, “Peter Fields, you are an Ironman!” 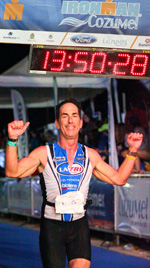 Immediately after crossing the finish line, I received a big hug from Angela. I then went into the medical tent to get a one-liter IV bag of fluid. Everyone is dehydrated to some point, and this was much needed.

Then off to get a post-race massage and some food. Unfortunately, caffeine gels kept me going during the last part of the run, and my stomach did not really want any food. But it was nice just to sit down and cheer on the last finishers trying to make the 17 hr. cut-off at midnight.

After collecting my gear and bike, I finally headed back to the hotel and got to bed at 2 am. Not much success with that after being very revved up all day. So the next day was spent recovering and sleeping

Thank you for allowing me to share this with you and for taking the time to read it. I want to thank everyone that offered me support and wishes. I am very grateful to every one of you. 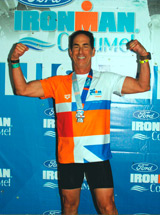 Click below for Pictures & Stories from my other Ironman competitions: