“Never give up on your goals no matter how tough things get.”
~Fred and Yvette Fields

As many of you have enjoyed reading my stories about my Ironman races, I will now give you a brief synopsis of my Ironman 8 in Cozumel, Mexico on November 27, 2016.

This was not as complicated as it was for my races in South America or in Europe. A 3 hr. flight to Dallas and then 2 1/2 hours to Cozumel. I arrived five days before the race. Then the usual registering, getting ready, and just sitting back and relaxing the last few days.

I awoke at 3:30 a.m., breakfast at 4 a.m, and then to the race start. In Cozumel, you start 2.2 miles away for the T1 (transition one) area where you have your bike, so first, you go to the transition area and make sure everything is OK as you leave your bike and bike clothes the day before. You fill your bottles with water, pump your tires, place some nutrition on the bike and then take a bus over to the race start.

There was nothing unusual at the race start this morning except for the fact that I forgot my speed suit.  A wetsuit is not allowed in the race when the water temp is above 76.5 degrees (actually it was 79 degrees today). Like many athletes, I usually wear a speed suit over my Triathlon suit. This is a suit that is very similar to what Olympic swimmers wear to streamline the body. But it really was no big deal as swimming is my best sport and at best it can take seconds and not minutes off my swim.

One of my highlights of standing in the corral waiting for the swim start was that I was actually standing next to, and met, The Iron Cowboy. This is a 41-year-old guy who just the year before had done what is really considered impossible. That is, he did 50 Ironman races in 50 days in 50 states. Yes, you heard me correctly. It was a monumental effort and he did it to raise awareness for several different organizations. I told him what an honor it was to have met him. 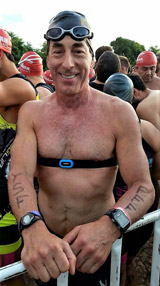 Swim Start with his parents’ initials on his forearms

The swim for me is never a major challenge as it is my best event. The start in Cozumel is very organized and controlled. They let about five to ten people off the end of the pier about every 15 seconds, so it never gets very crowded.

The water is very nice and it makes for an enjoyable swim. You can see down 30 – 50 feet and see schools of fish along the way. You can also see the scuba diver lifeguards who are strategically placed along the way in case anything happens.

While swimming, about halfway thru the race, I did detect a current as it picked up and was coming towards us. This is not the norm as usually, you swim with the current but occasionally it can change. I just moved on and kept motoring through. In the end, I found out my time was just a minute or two slower than usual but most were 10-20 minutes slower than their usual time.

Then out of the water, run over to the transition tent to dry off, get my helmet, bike shoes, and sunglasses, and then on to the bike for 112 mile bike ride. 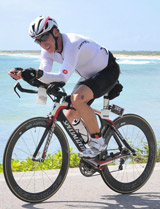 Having done this race three times before, I knew that bike course well. The backside of the island has a 12-mile stretch where you are hit hard by the wind. But I felt really good and rode the first loop faster than I had ever done before.

In the second loop, I kept my pace going but the winds got tougher on the backside of the island. They were hitting at about 20 to 25 miles an hour so you had to stay low on the bike.

In the third loop, I did well on the leeward side of the island but once I hit the windward side of the island, I slowed because the winds were blowing over 30 miles an hour. At this point, you just tough it out and wait for the final stretch, with the wind at your back, into town. All-in-all I felt very good and I ended up having my best cycle time in Cozumel. 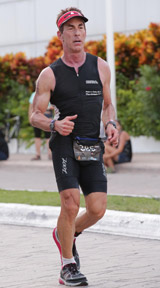 At a transition, I felt very strong. The sun was out and it didn’t rain but it was not too hot. In my first loop, which is about 8.8 miles, I felt very good.

During my second loop, I developed some foot pain but was able to adjust my stride so it really didn’t bother me. Unfortunately, halfway through this second loop I developed some hamstring pain. This is something I hadn’t had before. At 13.1 miles, there is the special needs station. This is where one leaves out things they would like halfway to the race. I took some extra gels and a Motrin I had in there. Unfortunately, that was not enough. So, I tried running nine tenths of a mile and walking a tenth of a mile. The pain stayed with me so then I ran/walked for a while. Ironman races are all about staying in the game, so I just put the pain out of my head and kept going. I also found some ice at an aid station and wrapped that around my leg. Overall this hindered my run. On the 3rd loop I walked a lot; at least more than I ran. 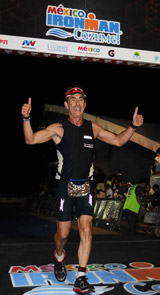 Dr. Fields crossing the finish line I was hurting but there was nothing I could do. That was for the first four to five miles of the 8.4 mile run. And with three and a half for miles to go I just grinned and beared it and said I’m almost done so let me just run through it. So, as I came back into town and the lights of the town became brighter and brighter, I felt very strong. I started seeing the big crowds at about a mile-and-a-half out which inspired me even more. I was now running very well, even passing other competitors who I cheered on. As I came to the last 500 meters the crowds and people cheering were very loud and inspiring. Although my leg was giving me a lot of pain at that time, in Ironman it’s all about crisis control. You never say never. So I just kept a smile on my face and kept moving forward. As I came down the last 50 meters stretch the feeling is indescribable. I finally knew I had done it. I’d finished my 8th Ironman. And as I came up to the Finish Line, I was exhausted but feeling unbelievably good. The feeling never gets old when the announcer says: “Peter Fields, you are an Ironman!”

As I’ve described in other race reports, my parents instilled in me the ability to work thru things no matter how hard it gets. Life is not always easy, just like an Ironman. There are some easy stretches and some hard times. But you just keep your head down and keep moving forward. The spirit of my parents never left me during the entire race. Their attention, caring and never ending love for me was always in my thoughts. As with every race, as I get towards the end, I imagine my parents there embracing me like they had for so many years. Their eternal love and kindness carries me through more than just my Ironman races.

PS Once again I was first out of the water in my age group in the swim. After the bike, I was in the top third of my age group. This was a first for me. Unfortunately after the run, due to the above-mentioned issues, I fell back and finished towards the top of the lower third for my age group. But all in all, it was a good race.

PPS I want to thank everybody who not only read this but also who thought of or followed me during the race. Thank you all very much. 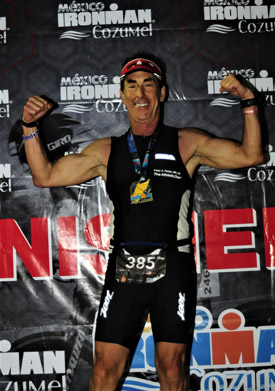