Quote for the day: One cannot achieve higher goals in life without some struggle. 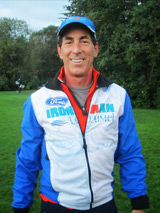 Pre Race
awoke at 3:30am so I could have breakfast by 4am. That way I would have three hours before the race, which starts at 7am, to properly digest everything. Once done eating, I stretched out and got dressed. I already had my gear ready to go which included the am, stuff plus the two special needs bags for the bike and the run. I then went downstairs to be driven to the village center, where I dropped off the special needs bags. Then I boarded one of several buses that were waiting to transport us to the swim start. Since the swim is held in a lake and there is limited road access, only Ironman official vehicles would have access to the lake.

When we got there it was not only still dark but about 45 degrees, so it was cold. But at least the rain from the previous day had stopped and no more was predicted. I planned well for the cold (60 degrees was not expected until noon or so). There is always a lot of tension floating around as over 2200 athletes check their gear, so you try your best to keep calm. We had left our bikes down there the day before as well as all our biking clothes and nutrition. The running gear and run nutrition was left at transition area 2 (T2) which is in town where the bike ride ends. This too was done the day before.
The only thing ones brings in the morning is ones wetsuit, goggles and cap along with whatever water/nutrition you take prior to the race. After pumping up my tires, it was on with the wetsuit and then head down to the waterfront.

The Swim
The lake is surrounded by mountains and the water temperature was about 68 degrees which was comfortable with a wetsuit on. All 2200 of us swam out about 50 yards and began treading water for about 10-15 minutes. At exactly 7am, the gun went off. It would be a long day. As always, I go out fast at the beginning of the swim (it is my best part). That way I try and get away from the majority of the crowd. Then I try and settle back into a good pace. There were a few turns prior to turning back on the fist loop (it was a two lop course), so it got really jammed and crowded; more than usual. I therefore did not really get into my good stroke pattern until the second lap. Plus I had my goggles knocked off twice. This was a first for me but actually a common occurrence with all the swimmers around you. My swim was therefore a bit slower at 1hr and 7 minutes, but still pretty good overall.

I took a bit longer in the change tent as I put on knee warmers, wind vest, a riding jacket, a skull cap for under my helmet and long liner gloves over my riding gloves (I get cold easy!!). 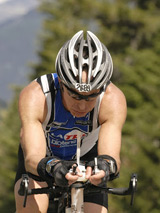 The Bike
Then I was off to the 112 mile ride with over 5600 feet of climbing. With the fact that there was a 30 mile or so stretch of flat riding, it was more like 5600 feet of climbing in 80 miles, which made it very hilly. The mountains around here are really very beautiful and the views (when we looked up) were really spectacular. Being wet, I was glad to have everything on. I got rid of the jacket on the first big climb at about 10 miles. And a big climb it was going up about 1600 feet in 10 miles. Then back down and then rollers all the way back thru town. We were now at 40 mile. Riding thru the crowds, who really helped to cheer us along, was invigorating. I now got rid of the liner gloves (which were over m bike gloves) as it was now above 60 (eventually hit about 68 at 2-3 pm). Then some uphills and lots of downhills for the next 20 miles.

After that, they had the special needs station. This is where one leaves out whatever you might want at a point halfway thru the ride (56 miles). I had nutrition supplies to restock what I had gone thru including a new bottle with liquid nutrition I use. I took off the leg warmers, vest and skull cap, gave it to one of the volunteers along with the empty bottle I had gone thru. She was very surprised, but happy. She saw my name on the bottle. She asked if that was me. When I said yes, she said that she had some knee problems and might call me. Wow, a business referral in an Ironman! Then a very flat section where for about 30 miles from mile 55-85 with a slight wind. The views of the mountains above were again spectacular.

Then back to the hills. The last part from mile 85 to 112, was essentially all up hill. The first climb was the longest and the steepest, which wore a lot of people down. Then mostly uphill with some slight some downhill riding all the way back to town. It was a tough time on the legs. As we approached town, the cheering again kept me going. Needless to say my quadriceps muscles (front of the legs) where one gets most of one’s cycling power were well worn. My time was 6:58, which was slower than Cozumel but with the hills here I was not disappointed.

After handing off my bike to a handler, it was off the change tent, where I changed put on my running shoes (no clothing change as what I wear under my wetsuit is what I ride and run in), and restocked myself with a few gel packs (there are nutrition aid stations about every mile).On the way out they had volunteers (with grass skirts on!), putting sunscreen on the runners. This would be helpful as it was hot sunny and getting warm. 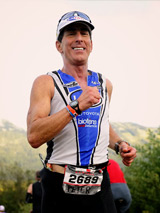 The Run
The run had over 1100 feet of climbing, none of which we very long. So with the very hilly ride, it made for a tough run constantly going up and down hills already tired legs. Some of the run went thru the woods on dirt trails, which was good for the legs. And in addition we ran around a lake, over a wood bridge on a pond and had some spectacular views of the mountains. Due to a buttock area (gluteus medius) injury, I had done most of my running in deep water. I only ran 3 or 4 times in the last five months outside and then only very short. This gave me the stamina I needed but did not toughen my feet.

At mile four I developed a blister on my left foot-right in the arch- ouch! I got a Tegederm patch (a wound covering) from a paramedic at mile 8, which eventually stopped the blister from getting worse. At mile five I also had very sharp pain right where my 3rd and 4th toes meet my foot on the right. This was causing me more problems than the left foot blister. This probably happened because I wear a shoe orthotic to help shift some weight off the 2nd toe where I usually have discomfort and the extra weight got transferred laterally to my third and fourth toes. I altered my gait and it became a lot easier to run. At this point it was actually easier to run (mid foot plant) than walk. But on the uphill portions (there were many short ones), I had to sometimes walk as I could not go on my toes. Eventually I was able to keep running and push thru it. As my mom always said, C’est al vie, (that’s life). This is what an Ironman is all about- crisis control which was good advice from my coach. The blister pain I just but in the back of my mind as it never got worse. All in all I eventually figured out I would not break 14hrs as I had done last year but with the big hills on the ride, the hills on the run and then the foot problems, I was OK with that. I ran most of the time and walked fast up the hills. And at 72 degrees (that was what it finally got to be) and sunny it was quite warm being at 2200 feet, the ice at the aid stations was a help. I just kept going using many months of physical and mental training to get me thru. At mile 18 or so, as we were running along an asphalt path near the woods, a baby bear came out of the woods and walked onto the path. We all just froze in place and stood there. One woman clapped her hands very loudly and the bear scurried off into the woods. As we started to run again, some said, “That was the baby. I wonder where the mom is?!” We all looked into the woods and had a good laugh. 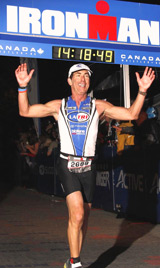 The Finish
So as I got closer to the finish line, all the aches just stated to fade away. The last mile or so I just let it all go and ran a good pace. As I entered the final turn, the last 150 meters was jammed with the crowds cheering loudly. At this point, I knew I had made it. All the months of training were worth it. And as I approached the archway and the finish line, I heard the announcer say, Peter Fields, “You’re an Ironman”! It never gets old. Final run time was 5:52 with an overall time of 14:18.

Final Thoughts:
All in all, I was very pleased as I did not have any of the dreaded Ironman stomach problems or any mechanical problems with my bike. I felt exhausted and drained but nonetheless very satisfied to have finished my third Ironman. Some may ask why I punish my body. I was not punishing it – just challenging it. When one is prepared, it is not a punishment. Plus it is as much a mental challenge, if not more than a physical one.

I love the quote by Viktor Frankel, MD; Holocaust survivor and world famous author of the book “Mans Search for Meaning” (my dad’s favorite book).

“Life can be pulled by goals just as surely as it can be pushed by drives”.

Dedication:
As you many of you know, each of my past two Ironman races, I have raced with dad’s initials written on me. This year I chose not to do so, although he was with me all the way. Instead this year I chose to dedicate this race to someone else and have their initials on my arm. Without her unrelenting love and support for me over the years (and I do mean years), this race would have never been possible. And at 87 years young, she still continues to be an inspiration to me. These initials were YSF (Yvette Simon Fields) and they belong to my mom.

Thanks to everyone for inquiring about me and cheering from near and a far. I really appreciated all of it and words cannot say thank you enough.
Your thoughts and well wishes helped me through my third Ironman.
Please feel free to see the pictures including the one with me smiling while showing off my mom’s initials. 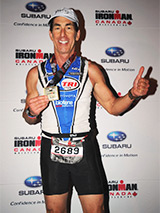