My parents, Yvette and Fred Fields said, “Always keep moving forward in life.” And in Ironman 9, and during all of my ironman competitions, that saying is always in my mind. 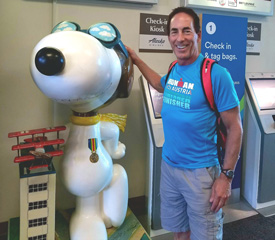 GETTING READY FOR IRONMAN 9

This one was a lot easier to get to than the others as it was my first Ironman in the US and in northern California- only a one-hour and 20-minute flight up to Santa Rosa.  At the airport, I was greeted by Snoopy and Charlie Brown, as Santa Rosa is the home of Charles Schulz, the creator of Peanuts.  They both offered me encouragement!

This race was a bit different than others. The lake where we swam in, Lake Sonoma, is 40 miles from downtown. This is very unusual when it is usually right at the start or within a few miles of the transition area.  So we had to report for buses leaving at 4 a.m. from the downtown area. Then I had to drive down to the downtown area, park the car and walk over to where the buses were.

Fortunately, my bike and other gear were already at the lake.  After a one-hour bus ride to the lake, I settled in by checking my bike, pumping the tires, filling the water bottles, and loading the nutrition on the bike.  Then it was time to head down to the lakefront. The day before, the water had been very warm, but the morning of the race they determined that it was still wetsuit legal (below 76 degrees). Since everyone else was wearing it, I decided to wear one even though I get very warm in it. 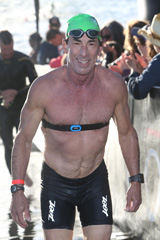 Swim Finish with his parents’ initials on my forearms

As we lined up to start to get in the water there were a few people without wetsuits. At that point, I thought maybe I should not have worn my wetsuit. Swimming is my best sport and the wetsuit does get restrictive in my arm swing, but I decided to keep it on anyway. As I entered the water I realized that the water was very warm. Since it was crowded, I stayed towards the outside of the swimmers because the fast swimmer group I was in can get very aggressive.

Halfway through the first loop, I realized I was getting too warm. After the first lap, I had the opportunity to run out onto the landing, take it off, and get back into the water. I lost a little time doing this but it was well worth it. The second lap went a lot better as I was not overheating.

After the swim there is a quarter-mile very steep hill to get to your bicycle. They told people to not leave shoes or other footgear down at the bottom. So most of us did not. But some people left shoes halfway up the hill. This was a violation of the rules but no one said anything. They did have some artificial grass-type material down so that the road up was not too tough. But the hill is quite steep and many people, including myself, walked or fast-walked most of the way so as not to exhaust ourselves for the bike ride. Quickly into the transition area, I grabbed my gear, changed, and got onto my bike. 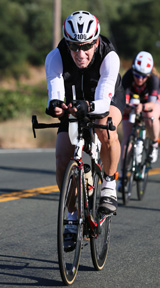 The bike had 4,000 feet of climbing. I prepared for this so overall it was not too bad. Lots of wineries; at least 30 or more. It was not as scenic as other Ironman races I have done because we did ride along a highway several times but pleasant when going by wineries.

Unfortunately, the roads were not in great shape. There are a lot of uneven areas as well as small little potholes. This was even more difficult as it was extremely sunny. When you would go through an area that was shaded you could not see the road since you were wearing dark sunglasses. This made for an uncomfortable ride.

Right before we got to town, at about the 65-mile mark, I got a flat. I did not notice it at first but as my speed dropped and I was pushing even harder, I had to get off the bike and check. Sure enough, the tire was flat. And it was the back tire, which takes more to change. But to my surprise, as I dismounted, one of the repair vehicles that circles the bike course (there were three or four of them) pulled up right behind me. What luck! The mechanic grabbed his pump and had my tire changed, pumped up, and ready to go in less than two minutes. Faster than I could have ever have done it. And without greasy hands too!

So back on the bike, I finally got to the town where we then had to ride two 17-mile loops. This was invigorating as the crowd was there. Unfortunately, on these loops, the road got even worse. There were areas that were so bumpy one of the following riders said he thought he lost a crown. We all laughed. Although they predicted it to be in the 90s, it only went to about 86 or 87 degrees. But it was very sunny with no wind and with minimal shade, so it did get warm. All in all, I had a good bike ride.

So, as we entered the town on the last loop, the crowds were cheering. Then it was into T2 tent and change into running shoes, visor, down some nutrition and out for the 26.2-mile marathon run. 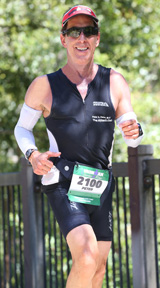 As we left the change tent, there were lots of people yelling and screaming encouragement. This was a good thing. It was now very sunny and very warm outside. Most of the run was done along a dry riverbed. Then the crowds dwindled. There was some shade but not everywhere, so the sun took its toll, and I had some difficulties with my foot. Fortunately, I could adjust my running gait and keep going.

The first 8.8 miles (the first loop) was pretty good. On the second, the foot pain got stronger and I had to walk/run quite a bit. But, as always, I just kept moving forward. There were a lot of runners out there for support. And of course, I was supporting the others that were not doing well. Being with the other athletes gave me tremendous moral support and the will to not give up.

The second loop was tough as it took place during the 11th and 13th hours of racing, so keeping one’s mind occupied is imperative. Dealing with my foot pain plus the physical and mental exhaustion that one experiences in an Ironman are always a challenge. As I began the third loop, I knew that if I made it to the turnaround at 4.4 miles, I was home free. As I made the final turn to head back towards town I knew that no matter how tough things got I was going to make it. 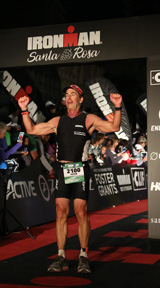 I encouraged those that I passed as well as the ones that were only on their second loop. As I exited the riverbed area up onto the streets, I thought I only had less than a quarter-mile to go, when in fact it was really over half a mile.

Just then a guy ran up to me and said, “Hey Peter you’re doing great”. I did not recognize him but I had my name on my running bib and thought he just saw that. He ran alongside me and told me that his girlfriend was not far behind. He told me her name and that did not ring a bell either.

It really didn’t matter as he was encouraging me, which was needed at that time. He finally turned around to go back to meet her. As I ran off, the energy that he had given me would carry me the rest of the way. As I came down the final stretch I knew I was going to finish my 9th Ironman Triathlon. It was tough but Ironman is never easy. The exhilaration and enthusiasm of the crowd, and hearing the announcer say, “Peter Fields, you are an Ironman!”, never gets old. Never.

As I came through the shoot and they took my pictures, I looked over and there was the young guy who I had seen as I exited the riverbed.  As I approached him, I recognized him as the son of one of my best friends.  We both laughed and embraced and I told him how appreciative I was for his encouragement.

These races are not only a physical challenge but also a mental challenge. With the difficulties with the wetsuit, the warm water, the uneven roads, the heat, the flat tire, and my foot problems on the run, this was not an easy race. But again, I persevered.

I always keep a remembrance of my parents with me at all times in my race jersey pocket. When things would get bad, I would reach back and touch it and say. “thanks mom and dad for being with me.” This kept me going through any difficulties I was having. With all their struggles in their lives (fleeing near-certain death in fascist Germany, emigrating with almost nothing, meeting each other in the US and building a new life and more), they just kept moving forward and never looked back.

They taught me over and over again, that no matter how tough things get in life, just keep putting one foot in front of the other and keep going. They supported me no matter what I did as long as I had my heart and mind in it. On this day, and every day of my life, I knew they were with me all the way.

As I said after they passed, “You are not dead, dead or only those that one forgets”. I will never forget them as they never forgot me. This, and all of my races, are dedicated in their honor. And I always start each race with their initials marked on my forearms.

I want to thank you for taking the time to read this and for supporting me, whether online, thinking about me, or by reading this. 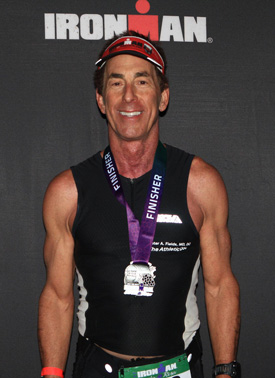