An adequate supply of antioxidant nutrients

‘An adequate supply of antioxidant nutrients may have a beneficial role for healthy aging’, says study 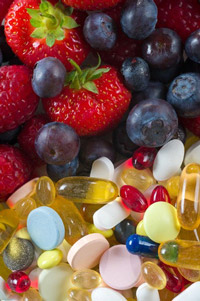 Specific sub-populations may benefit from antioxidant intakes to support healthy aging, with men particularly seen as an ‘at-risk’ group, says a new paper published in the American Journal of Epidemiology.

“To the best of our knowledge, our study is the first to investigate the relationship between antioxidant supplements and a multidimensional measure of healthy aging,” wrote the researchers, led by Karen Assmann from the Université Paris 13 in France.

“Our stratified analyses indicate that, while an overall beneficial association of a supplementation with combined antioxidant vitamins and minerals at moderate doses may not exist, specific subpopulations could benefit from antioxidant treatment. Yet, our subgroup analyses were of exploratory nature and thus have to be interpreted with caution. To verify our findings, further randomized controlled trials targeting populations at risk with a low baseline antioxidant status would be needed. According to our data, men may be such an ‘at risk’ group.”

Oxidative stress and aging
While oxidative stress has been a focus for the underlying biological mechanisms of aging and declines in health as we age, intervention trials using dietary supplements have often yielded conflicting results.
The medical community and the mainstream media are often quick to cite a controversial meta-analyses by Bjelakovic et al. in the Journal of the American Medical Association (2007, Vol. 297, pp. 842-857) which concluded that vitamins A and E, and beta-carotene may increase mortality risk by up to 16%.

However, that data was re-analyzed by a team of internationally renowned antioxidant scientists in 2010 which arrived at a different set of conclusions. This re-analysis, published in Nutrients, found that 36% of the trials showed a positive outcome or that the antioxidant supplements were beneficial, 60% had a null outcome, while only 4% found negative outcome.

On the positive side, data from the European Prospective Investigation into Cancer and Nutrition (EPIC) study published in 2012 also indicated that users of antioxidant vitamin supplements may be associated with a 48% reduction in the risk of cancer mortality and a 42% reduction in the risk of ‘all-cause mortality’ over 11 years of study (European Journal of Nutrition, Vol. 51, pp 407-413).

New data
Data from the SU.VI.MAX study adds to the body of literature around this subject, finding that, for the whole study population of 3,966 participants with a mean age of 65.3, no significant benefits were observed.

No significant benefits were observed for women, either, said Assmann and her co-workers.

For men, however, antioxidant supplementation was associated with a higher probability of healthy aging, they said.

“Altogether, our results support the importance of a well-balanced intake of antioxidant nutrients at nutritional doses (as can be supplied by a diversified and adequate fruit and vegetable intake) for preserving overall health in the course of aging.”
Source: American Journal of Epidemiology
Published online ahead of print, doi: 10.1093/aje/kwv105