My dad’s life could be an example for all of us during COVID-19 to encourage us to keep moving forwards and to not look back no matter how bad things are.

My dad passed away just shy of his 85th birthday in 2004. Although he never even knew about COVID-19, I learned a lot from him to help survive this current horrible situation.

He was a man that believed actions speak louder than words. And it was his actions in his life that have helped me through tough times in my own life, and his example applies especially today. To me, he was not only my dad but my best friend and my mentor. He taught me so much.

My dad was raised in a middle-class Jewish family in Berlin, Germany, which was then a very modern and beautiful city. Life for him was pretty good, even though his parents were divorced, which was not the norm back then. He was raised by his mother and grandmother and he had a happy childhood.

At first, new laws were put in place that prohibited Jews from attending public school. Then, in 1935, Jews had their citizenship taken away. Life as he knew it was changing and things were not good.

After that, he applied for a program where he could be sent to the United States to live with a family, since things were getting worse for Jewish people, and especially young men, in Germany. My dad was so excited when he was accepted into the program. He had a farewell party and said goodbye to his friends and relatives as he prepared for what was ahead.

A few days before he was to leave, the monies for this program were delayed through the banks and they were going to have to wait a while. Eventually, when the program started up again, his 16th birthday had already passed and he was now too old for the program. For a 16-year-old, this was devastating. But he realized he could not do anything about it and knew he had to just keep looking forwards.

Then on November 11th, 1938 Kristallnacht or the Night of the Broken Glass occurred.

My dad’s mother had been forewarned that something was about to happen, so a bunch of boys (including my father) left town for the night. Upon returning to Berlin, they saw the devastation and ruins that had been wrought upon the Jewish businesses.

He knew he had to get out. The noose was getting tighter. He did not know what was about to take place in the future, but he knew that Germany would eventually go to war with Russia. He also knew that as a 19-year-old Jewish boy, he would be the first to go.

There was only one place in the world he could go without his citizenship papers (they were taken away back in 1935), and that was Shanghai, China. All other countries had closed their doors, including the United States. But 8,000 miles was very far away, and although China was not really what he wanted, he had no other choice. He had to keep looking forwards to a better future.

My dad’s mother said she would follow. So, at 19 years of age, off he went to a very strange and foreign land. From the modern country that had given the world Mozart, Beethoven, Einstein, and others, he now found himself in a city that lacked central heat (in the winter it was below freezing), had no central plumbing, and required one to relieve themselves in a bucket. He was happy that he at least still received letters from his mother.

He did what he could to survive, he kept moving forward, and looked to the future for better days.

In 1941, on December 7th, the United States entered the war. At that point, the Japanese took control of the city and made all the Jewish people live in a ghetto-like situation. There was no time for self-pity, he kept moving forward, just like he had all the other times.

The fateful day for him came in 1942 when he received what was to be the last letter from his mother. It started off with the very tragic line:

“By the time you receive this, I will no longer exist.”

These words struck like a lead pipe over his head.

My dad’s mother had seen things collapse in Germany and she knew her days were numbered. She had been in hiding and figured she would be caught sooner or later. Unfortunately, she was right.

He could have just given up at that point. Not only was his mom murdered, but he also had lost generations of his family, which left him without 90% of his family and most likely most of his friends. Plus, he was living in squalor in a foreign city 8,000 miles away from his own country. Devastated would be too light of a word to describe how he felt.

But he knew that you cannot look back. He understood what was needed was to keep looking forward and always hope for brighter days in the future. 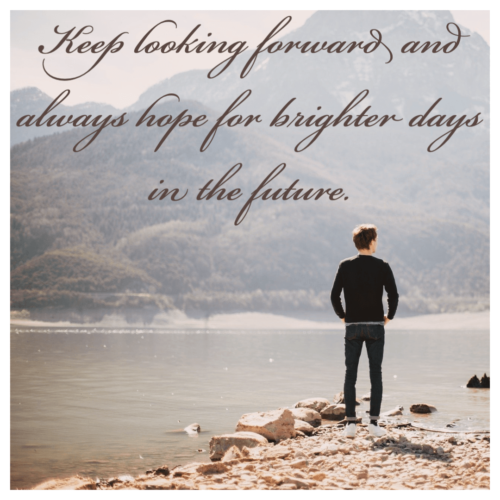 And so, he went on. He persevered for the rest of the war in Shanghai.

Two years after the war ended, in 1947, he finally received papers to enter the United States, which had always been a dream of his since his youth. Penniless, extremely thin, and without any family left, he had no idea of where he was supposed to go, or what he was supposed to do. But he just kept moving forward, taking one day at a time, and looking for the best the world could offer.

The rest is history. He met my mom, started a successful business, raised myself, my brother, and my sister, and had a wonderful life.

My dad’s life could be an example for all of us during COVID-19 and might encourage us to keep moving forwards and to not look back no matter how bad things are. Always hope for a wonderful future, strive to do the best you can, take care of yourself, look out for others, and always keep a cheerful smile on your face.

That was my father. Always looking forwards with a smile and gratitude, no matter how bad things got. If you met him you would never guess the hardships that he went thru.

In no way am I comparing our situation now to what my dad went thru, but hopefully this story and his words and actions will help you during these very difficult times.

So please be safe, be cautious, but keep looking forwards no matter how bad things get.

There is a bright future out there for all of us.