Needles, Not Knives, To Treat Sports Injuries And Degeneration

Home » Needles, Not Knives, To Treat Sports Injuries And Degeneration

Needles, Not Knives, to Treat Sports Injuries and Degeneration 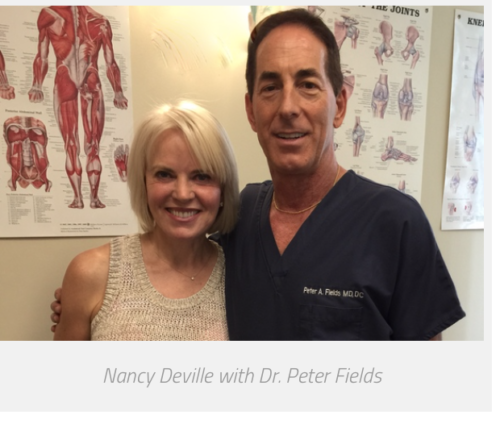 My first pair of running shoes were men’s shoes because they didn’t make them for women in 1974. That’s how many years I’ve been pounding away at my joints. The first sign of wear began around 1994. On the urging of an orthopedic surgeon, I quit running and started hiking and yoga. Unfortunately, the damage had already been done.

Though I’ve had both of my rotator cuffs worked on after trashing them doing Ashtanga, I don’t want knee or hip replacements. Call me vain, but I want to be able to do a full lotus for the duration.

Fortunately, for me and millions of boomers like me who have been athletic our entire adult lives, we now have regenerative medicine to turn to rather than cortisone injections, which merely provide temporary relief (and can ultimately cause more damage), or joint replacement, the extreme fix.

There are several modalities of regenerative medicine, a system of medicine that employs your body to heal itself.

Prolotherapy Is the Most Common Type of Regenerative Medicine

The most common (and least expensive) of regenerative medicine is prolotherapy, which involves injecting a mild irritant such as dextrose, along with tapping the damaged area with the needle. The irritant combination causes an inflammatory response, which stimulates the immune system to rush in and begin healing whatever particular damage you have.

If your injury or degeneration requires a bigger gun, the next step is Platelet Rich Plasma (PRP), which is essentially your own blood. Your blood is drawn and spun down to filter out the platelets. These concentrated platelets are injected into the area to be treated. Blood platelets contain potent growth factors that begin the repair naturally.

My first doctor was Allen Thomashefsky, a former Iron Man triathlete, who practices in Santa Barbara and Ashland, California. I had gotten to the point, after 20 years of running followed by 15 years of serious hiking, that I was hobbling around on painful feet. I had seriously begun to question whether I would be able even to walk around normally, my feet were so painful. Prolotherapy injections put me back on the hiking trail (okay, the injections hurt, but no pain no gain).

In addition to sports, I am a lifelong knitter. I found myself waking up with hands like claws, an attractive image, I know. But beyond the aesthetics, I wanted the use of my hands back. Dr. Tom injected every single one of my knuckles. It was like magic.

Recently, I’ve taken up bushwhacking in Daniel Boone National Forest in the Appalachian foothills. I was seriously handicapped by a knee that had begun deteriorating from my 20 years of running. Living in LA now, I went to Dr. Peter Fields (pictured here with me), who is one of a few physicians in the US who has both medical and chiropractic degrees. He’s an active Iron Man triathlete and, like Dr. Tom, a wizard in regenerative medicine. A mere two sessions of prolotherapy and my last hike was pain-free.

Boomers have a long history of trailblazing. As I said, women didn’t run before 1974. Exploring the boundaries of human endurance has opened up new horizons for subsequent generations. But when it comes to joint damage, our fitness model came with a price tag. And speaking of price, regenerative medicine is not paid for by insurance companies or Medicare. They will replace a knee or hip at astronomical costs, but they will not pay a fraction of those costs for your body to heal itself. I believe they will wake up, eventually. For now, I would rather have brand new cartilage in my knee that my body made itself than have a new outfit. My body has always been my priority.1

Read the original article in The Three Tomatoes by Nancy Deville