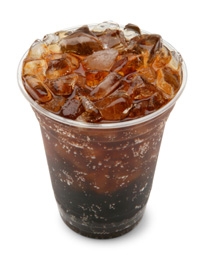 Sugary beverages are the leading sources of added sugars in diets in the US. Did you know a single can of sugar-sweetened soda contains about the upper limit of the recommended 25 to 50 g per day?1 Sucrose-sweetened soft drinks increase the risk of disease and have been implicated for decades in cardiometabolic diseases.

Sugary beverages are any liquids sweetened with added sugars. And there are many of them like brown sugar, corn sweetener, corn syrup, dextrose, fructose, glucose, high-fructose corn syrup, and more.

What kind of drinks are considered sugary beverages?

All of this sugar has harmful effects. Sugary beverage intake boosts the risk for weight gain, metabolic syndrome, type 2 diabetes, coronary heart diseases, hypertension, and stroke. In one study, over 50,000 deaths from cardiac reasons were attributed to high sugar consumption. 2

The Framingham Heart Study released the results of an observational study that associates the consumption of sugary drinks to an increased risk for coronary vascular disease and with adverse changes in high‐density lipoprotein cholesterol and triglyceride concentrations and may contribute to the development of dyslipidemia.3

The researchers expressed surprise that it did not matter whether the soft drink was diet or regular. “We were struck by the fact that it didn’t matter…the association with increased risk was present.” said Ramachandron Vasan, M.D., and senior author of the study and professor of medicine at Boston University. “In those who drink one or more soft drinks daily, there was an association of an increased risk of developing the metabolic syndrome.”

The study, which included approximately 9000 person observations of middle-aged men and women, showed that those who consumed one or more soft drinks per day had a 48% percent increase in metabolic syndrome prevalence compared to those consuming less than one soft drink per day.

There has been some press regarding the potential health effects of high fructose corn syrup, a common but relatively new sweetener. However, the Framingham Heart Study shows an equal risk increase regardless of the soft drink’s sweetener type.

How Do Soft Drinks Cause Problems in the Body?

Theories by the research group include that, potentially, the drinks’ high sweetness makes a person more prone to eat sweet items, that the caramel content in soft drinks may promote the development of advanced glycation end products. And potential complexes of sugars can then result in insulin resistance, which can cause inflammation in experimental models.

The journal, Current Opinion in Clinical Nutrition & Metabolic Care says, “sugary drinks enhance levels of circulating triglycerides and the accumulation of fat in the liver, muscle, and in the visceral fat depot.  Concerning the mechanisms for SSB to induce these metabolic aberrations? It is mainly fructose (free or as part of the sucrose molecule) that is the main driver of these metabolic aberrations presumably primarily by inducing lipid synthesis in and release from the liver.”4

Other observations noted in the Framingham Heart Study for people who drink at least one soft drink per day include:

The Framingham Heart Study was established in 1948 to identify the common factors or characteristics that contribute to cardiovascular disease (CVD) by following its development over a long period of time in a large group of participants who had not yet developed overt symptoms of CVD or suffered a heart attack or stroke. The Framingham Heart Study is a joint project of the National Heart, Lung and Blood Institute, and Boston University.3

A recommended amount of soda consumption to maintain health has not been determined. But intake of soft drinks should generally be reduced as much as possible to improve health.Whatever the ultimate mechanism leading to increased risk, it seems like a wise recommendation would be to substitute water for soft drinks.