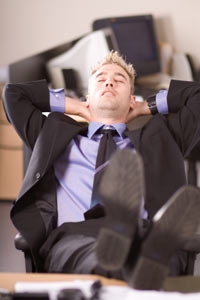 Daytime nappers may be in luck. New research shows taking a midday nap, and workplace napping can actually improve productivity.

Sleep deficiency is a pretty prevalent problem. It results from short sleep duration, poorly timed sleep, or poor quality of sleep. “The Institute of Medicine estimates that 50 to 70 million American adults have a chronic sleep disorder that hinders daily function and contributes to poor health.”1

American culture is all about productivity. And that is true even if sleep needs to be sacrificed. Why sleep a lot when you can get more done without it, right? But that’s not what studies show. Sleep boosts our productivity because it helps our memory. “Not only does a daytime nap appear to facilitate the formation of direct associative memories, but we now conclude that napping also facilitates the formation of relational memories, such that associations between items in memory acquired before sleep are strengthened and reorganized by sleep to be flexibly retrieved at a later time.”2

We all know that young children need to nap. And some adults maintain that habit. But most don’t. Work and life demand way too much time and make naps difficult to fit in. But other countries think differently. For instance, Spain and Italy incorporate mid-afternoon siestas and riposos into the workday schedules to allow for napping. Most Americans would balk at that idea!

But what is the cost of working in a state of fatigue?

“According to a fatigue cost estimator from the National Safety Council and Brigham and Women’s Sleep Matters Initiative, the health-related cost of lost productivity is $136 billion a year.”3 The result of sleep deficiency is reduced productivity in the workplace. Furthermore, it results in increased absenteeism, more workplace injuries, higher health care costs, and higher rates of car accidents during commutes. What does that mean to the employer? Likely higher costs in the long-run. Therefore, a short workplace nap to increase productivity and actually reduce costs in the long-run may be the smart way to go.

Does Workplace Napping Only Help the Sleep Deprived?

Naps do not just benefit those who are sleep deprived. That’s right! Even individuals who have rested sufficiently reap the rewards of improved alertness, performance, and productivity. Naps relieve stress too. And reduced stress results in added health benefits. Why push through fatigue when you could take a nap instead?

It’s Really Doesn’t Make You Tough To Be Sleep Deprived.

Although many may be proud of “having gotten only a few hours of sleep,” it’s really not that good for you. The habit of getting the recommended 7–9 hours of sleep per night is really your best bet. Plus, companies are integrating workplace naps as part of a change in workplace culture. In fact, some of the world’s largest companies are doing it. Google, Uber, Nike, Cisco, Zappos, Huffington Post, PricewaterhouseCoopers, Proctor & Gamble, and Ben & Jerry’s are some of them. Moreover, they are also providing the accommodations necessary to take better naps, like secluded rooms equipped with nap pods or beds.3

Spread the Good News of the Benefits of Napping

Since workplace napping goes against the grain for many Americans, the challenge is to spread the news regarding how beneficial it really is.  Napping combats many physical, mental, and financial consequences of fatigue. Once Americans understand the health benefits, they will be more responsive to workplace napping as part of the scheduled workweek. Give them evidence, and they will be more prone to accept it.  “Building and disseminating this evidence will push us closer to a society that values napping and works to remove the stigma of taking that mid-day snooze.”3

If workplace napping is not a part of your work environment, it may be coming soon! And you can try different things to make it a part of your life now. For example, napping may be as easy as closing your eyes for 5-15 minutes. You can lie down if possible. Or sit in your car. But also just sitting in your chair or leaning over a desk will work too. Be creative, and you can find a way.