Cervical Instability: Neck Pain and Symptoms That Change Your Life

When neck injuries occur, like after car accidents, sports injuries, or even wear and tear, the sufferer often lives with neck pain and other disabling symptoms. In this article, we are not referring to a catastrophic neck injury, but one that very often may be considered “minor.” Yet the sufferer still lives with symptoms that alter their ability to live normally. The cause may very well be cervical instability, a disorder of the neck or cervical spine that can result in a myriad of symptoms.

The Uniqueness of the Cervical Spine

The neck is unique because it consists of vertebrae that are smaller and more mobile than all of the movable vertebrae of the spine. The high degree of mobility in the neck or cervical spine is necessary in order to move the head through all the different ranges of motion we put it through. Blood is also transported through the neck on the way to the brain by means of the vertebral artery. The artery goes up through an opening called the transverse foramina in the vertebrae of the neck.

Why are these features important when discussing neck pain, symptoms, and instability? Well first of all, although the mobility of the neck is great and necessary in order to get things done and function like we like to, this same feature makes the neck vulnerable to injury.

Ligaments are Affected by Neck Injuries Too. And When Injured, Cause Cervical Instability and Pain!

Secondly, when an injury to the neck occurs, ligaments are affected. The ligaments are structures that are primarily responsible for joining bones. And they are especially vulnerable when trauma occurs. When the neck is stable, it moves and functions normally. And that’s because it is remaining in proper alignment. Plus, proper alignment and function protects the blood vessels, nerves, and spinal cord. But an injury to the ligaments changes this whole dynamic because it causes the cervical spine to become unstable.

An unstable cervical spine cannot provide adequate support to function properly. But why does the instability make a difference? The instability alters the alignment of the neck which creates a cycle of imbalance between the different neck structures. It also causes too much movement of the neighboring vertebrae. And that stresses the ligaments that support the vertebrae. It also puts undue pressure on the nerve endings within those structures. The result is neck pain! A host of other possible symptoms are set into motion as a result of the various blood vessels and nerves running through the neck vertebrae. 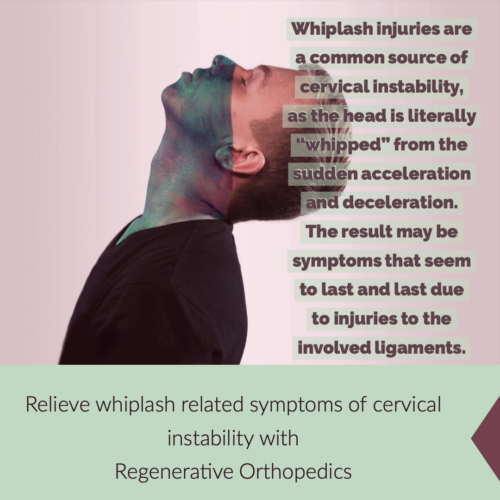 People who have experienced whiplash, often have symptoms that seem to last and last. These symptoms are frequently a result of the instability of the vertebrae of the neck, or cervical instability.

Whiplash injuries are a common cause of cervical instability. The head is literally “whipped” in these injuries. The sudden acceleration and deceleration during rear-end collisions is an example of whiplash. During whiplash, a severe flexion is generated followed by an extension of the neck, in a whip-type motion forward and backward.

Let’s consider a person who is looking in the rearview mirror at the time of the collision. The rotated neck position puts the ligaments in even greater vulnerability for injury. Why? Well, these particular ligaments are those that help in side to side head movements and they are more susceptible when in this position.

As the ligaments become weaker, they are unable to provide a stable neck structure.  And that leads to even more injury and an ongoing provocation of the nerve endings. The ongoing provocation alters a part of the nervous system called the sympathetic nervous system (SNS). And then the SNS becomes increasingly activated. The result of an overactive SNS is a myriad of symptoms, including a syndrome of symptoms referred to as Barré-Liéou Syndrome. We’ll talk about some of the symptoms of cervical instability below.

What Are the Symptoms of Cervical Instability?

Symptoms of neck instability or cervical instability include neck pain, muscle spasms, cracking sounds, and numbness in the arms and legs. Also, remember how we discussed the unique anatomical relationship of the vertebral arteries through the transverse foramina?

Instability of the neck can cause a change in the flow of the arterial blood through the vertebrae when they are moving excessively. The vertebral artery provides circulation to half of the brain. Therefore, the extra mobile vertebrae can pinch off this artery, fostering an insufficiency of blood supply as it travels up to the brain. The condition is called vertebrobasilar insufficiency (VBI). Symptoms of VBI include neck pain, headaches/migraines, dizziness, drop attacks, dizziness, difficulty swallowing and/or speaking, and disturbances in hearing and vision.

Repair the Neck, And Relieve the Pain of Cervical Instability with Regenerative Orthopedics 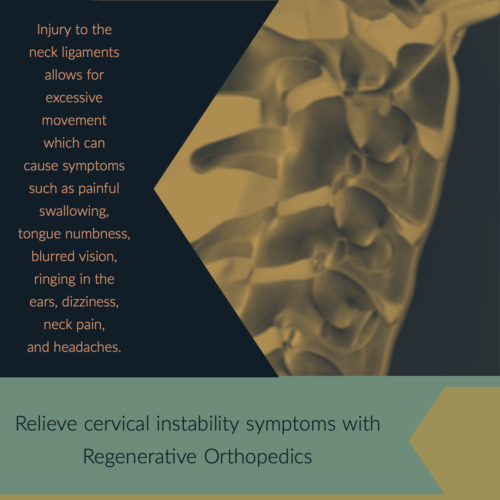 All of these symptoms can perplex many clinicians. Meanwhile, the sufferer lives with debilitating symptoms. Oftentimes, they go from doctor to doctor, seeking some type of relief from the many and varied symptoms they experience.

Chiropractors do a great job at not only assessing these problems but treating them.  But when Chiropractors are not able to solve the problem or find a complete solution, one must look elsewhere.

Talk with your chiropractor about Regenerative Orthopedics and what it can do to save your neck from surgery. Many chiropractors know Peter A. Fields, MD, DC, and have heard him lecture, as Dr. Fields is both an MD and a chiropractor.

Regenerative Orthopedics is actually a great solution to the puzzle of neck pain and cervical instability. Stem Cell Therapy, PRP, and Prolotherapy are types of regenerative therapies that repair the injured ligaments at the core of the problem. Regenerative Orthopedics involves regenerative injection therapies that tighten, repair, and regenerate the ligaments involved in neck instability. The treatments eliminate the unstable movement, associated neck pain, and multiple symptoms.

Regenerative Orthopedics is a safe non-surgical option that brings stability back to the neck and its structures, which results in increased functional ability. Those who suffer from all of these symptoms as a result of the instability of the neck or cervical spine can finally get relief from this life-altering condition.