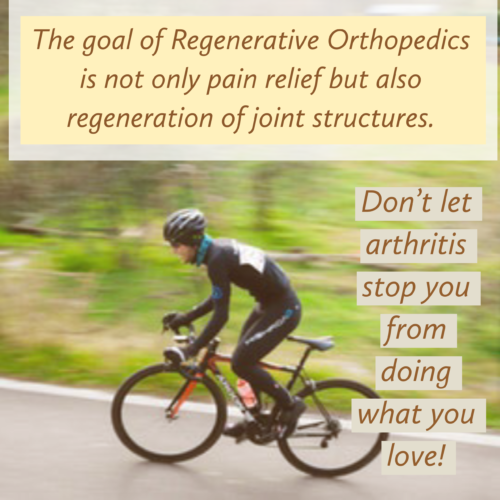 Older Athletes Can Keep Doing What They Love

Athletes want to maintain their level of exercise and activity over the years. Understandably so! Exercise is one of the most effective ways to improve and maintain health. Keeping active physically is correlated with lower risks of cardiovascular disease, lower blood pressure, weight reduction, as well as the provision of an increased sense of well-being.  It’s no wonder that more and more people are becoming active in exercise programs and desire to maintain a level of physical activity throughout life. But is exercise associated with a higher risk of arthritis?

Athletes—and especially long-time athletes—may wonder if increased joint stress leads to premature “wearing out” of the joints and the development of arthritis.

Studies seem to show that joint injury is the main factor that increases the arthritic risk in athletes. And exercise itself has more of a protective role.

For example, having well-developed muscles decreases the loading on the cartilage and thus has a protective effect. Animal research also shows that exercise, such as running, is not harmful to normal joints even under high loads and over long distances. However, the same type of exercise done on an injured joint will lead to arthritic change.

Activities, like bicycling and pool exercises, that maintain flexibility, strengthen the muscle and boost coordination, actually protect the cartilaginous surfaces, because they help to maintain joint function.

Sports Injuries in the Older Athlete

Sports injuries and traumas accumulate over a person’s life and these can damage the ligaments and cartilage. It is not uncommon for athletes to injure joints. And it is this injury or the non-healing of it that causes the degenerative process to start in the joints.

The repetitive low-grade impact from athletic events can be enough to damage the soft tissues and start the arthritic process. Some studies do note an increased incidence of arthritis in particular sports due to their vigorous nature and their propensity to lead to trauma. For example, wrestlers, boxers, baseball pitchers, cyclists, gymnasts, ballet dancers, soccer players, weight lifters, and football players have all been reported to have degenerative joint disease due to sports-related stress. This degeneration occurs due to soft tissue injuries (non-healed injuries) that were not fully addressed.

The hope for the older athlete is to be as fit as when in the prime of their athletic careers. Often, however, this is not the case because of the degeneration that has occurred due to non-healed sports injuries. Sports injuries that lead to symptomatic arthritis later on in life are generally those that occur to the ligaments. That’s because the ligament injury causes the joint to become unstable.

Athletes want to play sports for a lifetime. Unfortunately for many, the degenerative changes that occur due to non-healed old athletic injuries, combined with a decreased ability to heal, and the natural degeneration that occurs with aging, make sporting injuries commonplace in the older athlete. A lifetime of microtraumas in ligaments and tendons over the years, along with weakening muscles and poor flexibility, can lead to a reoccurrence of these injuries.

The Natural Progression of Arthritis Starts with Ligament Injury

What causes the mechanical and molecular events in arthritis to occur? Although cartilage lacks nerve fibers, could cartilage wear and tear be the origin of arthritis? An article published in Gerontology conducts a literary review to prove that arthritis starts with ligament damage. After reviewing numerous research articles, the authors conclude that subchondral bone changes (the bone just beneath cartilage) precede any cartilage change associated with arthritis. These bone changes are due to a loss of tension on the bone at the ligament/bone insertion.1

“The earliest change appears to be at the ligament-bone insertion site.  We propose that it is a change in the ligament that leads to an alteration in the tension on the bone at the bone-insertion site which precipitates bone remodeling (injury to subchondral bone). The health and integrity of the overlying articular cartilage depend on the mechanical properties of its bony bed.  Ligament injury precedes the subchondral bone changes and these changes occur before articular cartilage degeneration.”1

Taking into account the progression of arthritis, it becomes clear that ligament integrity or lack of integrity is what needs to be treated to prevent further joint destruction. In other words, ligament laxity causes bone changes that in turn cause cartilage change and damage. Ligament laxity is due to ligament damage.

When researchers attempt to stimulate arthritis or degeneration in a joint, they do so by damaging the ligaments around the joint. Wow! What happens then? Once the ligaments are damaged, the instability that is created increases the pressure in the joint where the ligaments were injured. The increased pressure then causes an acceleration of the degenerative process. Eventually, the body will stabilize the segment by overgrowing bone. This overgrowth of bone is typically read on x-rays as bone spurs, spondylosis, or fused joints.

Gerontology points out the need for therapeutic strategies to be redirected at the healing of the ligament damage- the initial cause of arthritis. Fortunately, Regenerative Orthopedics does just this and can repair the degenerated joint.

Standard arthritis treatments generally involve only symptom management rather than repair of the joint and include NSAIDs, cortisone shots, and even surgery to provide pain relief.

The most common surgery is arthroscopy which in numerous medical studies was found to be no more effective than placebo in regard to arthritis.

Joint replacements are being recommended more and more, demonstrated by the fact that hundreds of thousands are performed every year. All of these treatments are anti-healing and can cause further degeneration of arthritic joints. And once the surgery is done it cannot be undone!

Regenerative Orthopedics directed at the painful sites where ligaments and tendons connect to bone, as well as at trigger points and adjacent joint spaces, produce a healing response. Along with growth factor stimulation, this induces healing and strengthening of the damaged or diseased structure. The result is the repair of the damaged ligaments and soft tissue which allows the aging athlete to continue with their desired activity and sport. Regenerative Orthopedics can reverse joint damage and alleviate arthritis pain. A number of case studies have shown the success of regenerative techniques in patients with diagnosed arthritis.2,3

Exercise is Beneficial for Older Athlete

In a study of almost 17,000 people examined from 1970-1995, high levels of physical activity were not associated with symptomatic arthritis in older men and women runners over age 50. Six other reviews on the effectiveness of exercise, both of high and low intensity, on the management of arthritis in the elderly found clinical outcomes of arthritis to be improved.4

According to scientific studies, exercise and recreational activities appear to not cause wear-and-tear on the joints.  This can be seen in medical research over many years which supports the findings that exercise is beneficial rather than harmful. The author of a systematic review of multiple medical databases said, “The first consideration with respect to exercise is whether “wear and tear” resulting from repetitive use of articular cartilage is the primary driver for degenerative change. If this were the case, the exercise would lead to progressive arthritis. According to the evidence presented here, this does not seem to be the case.”5

Regenerative Orthopedics can make a significant impact on the rehabilitation of the injured older athlete. Despite age, typically only four or five sessions are needed for the athletes to achieve complete healing and be back to their physical best. Injections involving the knees, shoulders, hips, ankles, elbows, and other joints can easily be performed with, often, dramatic results and improvement.