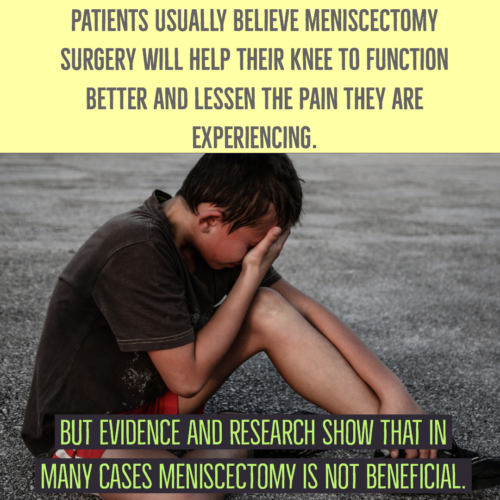 Menisci are C-shaped material in the knee which act as shock absorbers between the femur (upper leg) and tibia (lower leg). Each joint has two menisci to balance the body weight evenly and keep the knee stable.

Menisci are often damaged in people who are active in sports (running, biking, tennis, hiking, golf, soccer, football) and most other activities that involve the knees. And they can also develop degenerative tears over time as we age.

Symptoms of torn menisci include pain and swelling in the knee which may be accompanied with a sensation of the knee “giving away”. There may also be difficulties straightening the leg which may be associated with a catching or locking sensation.

The Old Treatment for Meniscus Tears

Traditionally, torn menisci were repaired surgically. And that involved cutting the torn parts out. However, several studies have proven that this operation is not a good option for damaged menisci.

Many people have had them even though their problem was not significant. Just using an MRI to ‘convince’ people to have surgery is not good medicine. History and physical exam are much more important.

In 2013, a study showed that meniscus surgery in patients without arthritis was no better than a fake surgical procedure. Another study published in the New England Journal of Medicine in 2012 revealed that on average patients who had meniscus surgery did not do any better than those who skipped the operation and just had physical therapy.

And a study done in 2002 by Baylor College of Medicine revealed that debridement (cutting away the damaged parts) of knees with arthritis and degenerative menisci tears was no better than placebo. The latest study in this area revealed that operations for meniscus locking were no better than placebo. Researchers evaluated 146 patients who had mechanical symptoms like occasional locking or knee catching which were thought to be caused by the menisci. And half of these patients had meniscus surgery while the other half had sham surgery. It was then found that the operation provided no benefit in relieving the catching or locking!

The new treatment for meniscus tears does not involve cutting and removing. It entails boosting the body’s natural ability to repair the injured menisci so that they heal themselves. This treatment is a part of Regenerative Orthopedics and is known as platelet rich plasma (PRP) therapy. 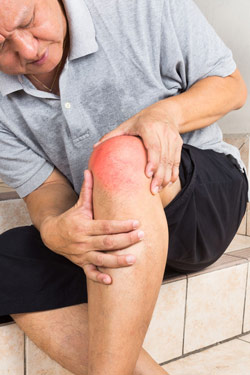 Has Meniscus Surgery left you with continued knee pain?

PRP involves injecting platelets from the patient’s own blood into their injured knees. It should be accompanied by Dextrose Prolotherapy to the outside of the joint where important ligaments and tendons are.

PRP is cost effective when compared to menisci surgery since it is done in the doctor’s office and it does not require the patient to be admitted into a hospital. It also shields the patient from other risks associated with surgery (infection, medications, severe bleeding) and general anesthesia.

PRP is also time effective since the patient can slowly resume their activities of normal living after the treatment. This is in comparison to the surgical operation which requires immobilization for several weeks.

Peter A. Fields, MD, DC is an expert in PRP Regenerative Therapy as well as Prolotherapy.

He is also an expert in the field of Stem Cell Regenerative Therapy for those that have been told that they have worn out cartilage, bone on bone or have their knee, hip or shoulder replaced.

This procedure could save one from having their joint permanently removed and replaced, which sometimes can be disastrous.

Please give the OrthoRegen office a call 310-453-1234 at if you have any more questions about avoiding surgery on your joint and spine.