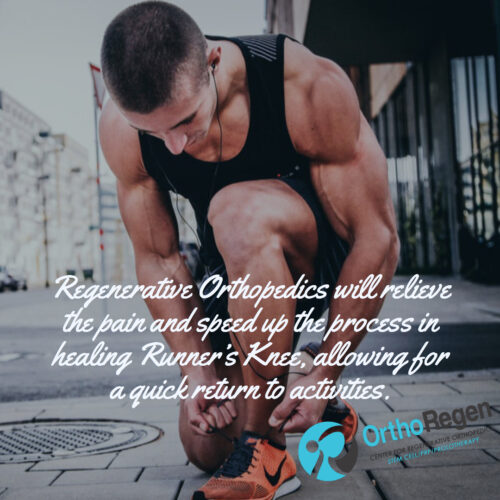 Runner’s Knee can affect one or both knees and is a knee complaint among athletes and non-athletes alike. And it particularly affects adolescents and young adults. Also, the condition is quite common in younger recreational runners, with females suffering more frequently than males.

Several forces act on the patella to provide stability and keep it tracking properly, as it articulates with the patellofemoral groove in the femur. The patella not only moves up and down but also tilts and rotates. And that movement allows for various points of contact between the patella and femur.

There are many theories to explain the pathophysiology of Runner’s Knee. They include muscular, overuse, and biomechanical theories. The cause of pain and dysfunction of Runner’s Knee may result from abnormal forces. Forces such as tight or weak quadriceps along with subluxation or dislocation of the patellofemoral joint. Runner’s Knee may be due to prolonged repetitive activities such as running or jumping, which put excessive sheering forces on the patellofemoral joint.

Anatomic factors that predispose towards patellofemoral pain or instability include excessive rotation of the hip or shin bone, knock knees, hyperextended knees, and/or poor foot alignment. Ligamentous, meniscal, and soft tissue damage can also cause patellofemoral pain syndrome. Other causes of patellofemoral pain are fractures, arthritis of the knee, and bony tumors in or around the knee.

Although the exact etiology of Runner’s Knee is unclear, the abnormal articulation along with abnormal muscular and other biomechanical factors change the forces placed upon the patellofemoral joint, which causes instability and improper tracking as the patella articulates with the patellofemoral groove in the femur.

For example, when the knee is flexed, the patella glides through the groove in the femur. If the bones in the lower leg are not aligned correctly, this gliding becomes abnormal. An overload on the patellofemoral joint occurs with flexion of the knee as this movement increases the pressure between the patella and the various contact points with the femur. With repeated episodes, the joint becomes unstable, especially if the joint remains out of alignment. This abnormal tracking can lead to increased wear between the bone surfaces and, eventually, the articular cartilage.

Besides the tenderness behind, around, and at the center of the patella, there may also be pain toward the back of the knee. Crepitation or cracking sounds may be heard, as well as a feeling of instability in the knee joint. The pain typically occurs with activity and often worsens with those activities that include steps, hills, and uneven surfaces. Going downhill or downstairs aggravates the condition.

Pain can also be triggered by prolonged sitting due to the extra pressure between the patella and femur during knee flexion. Straightening of the legs may decrease the discomfort. Squatting and kneeling also exacerbate the pain, which can be dull, sharp, or burning.

How is Runner’s Knee Treated?

This approach may temporarily help, but it does not fix the problem of instability in the knee joint, causing the misalignment. With Runner’s Knee, instead of tracking in the groove of the femur, the patella oftentimes tracks laterally. A sunrise view X-Ray and a functional assessment of the knee by the physician will reveal how the patella is tracking. Strengthening of the vastus medialis may be helpful, and exercises such as cycling are recommended, but often that alone will not resolve the Runner’s Knee.

Regenerative Orthopedics, along with vastus medialis strengthening, will relieve the pain and speed up the process of normalizing the patellar tracking in Runner’s Knee. The treatment allows for a quick return to activities without the need for surgery.