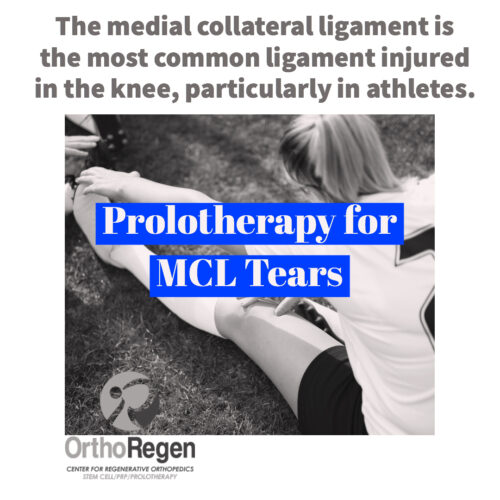 The Medial Collateral Ligament (MCL) is a vital knee structure for providing stability to the knee joint. It is one of four major ligaments of the knee, along with the anterior cruciate (ACL), the posterior cruciate (PCL), and the lateral collateral (LCL) ligaments, all of which stabilize the knee. Other ligaments are often injured when the medial collateral ligament is injured

MCL injuries also affect the meniscus. Since part of the MCL is attached to the meniscus, a tear of the meniscus can accompany an MCL injury.

When a ligament in the knee is injured, the most common ligament affected is the medial collateral ligament (MCL).  In general, the MCL is a very strong ligament. And it is pretty resilient when injured. In many circumstances, physicians will opt for non-surgical treatments, because they take into consideration the ability of the MCL to heal on its own.

An athlete with injury to their MCL often returns to their usual training or routine after just a few weeks. But is this the best course of treatment for an injured MCL? In this article, we will explore the injury and healing process of the knee and its MCL, and also examine whether a medial collateral ligament injury should just heal on its own or if  this path allows for a weaker MCL. Also, does allowing the MCL heal on its own make one more susceptible to re-injury?

The Self-Healed MCL vs the Pre-Injured State

The MCL has a greater blood supply than the ACL one thing. And that adds to its greater ability to heal.  However, studies have shown that even though conservative therapy for MCL injuries has been shown to be more effective than in ACL or even PCL injuries, the healed MCL remains weaker and less efficient than the ligament in its pre-injured state.

The ligament heals by scar formation, which is an inferior type of healing, which results in less strength than in normal ligaments. And the weak ligament leads to ligament laxity and an unstable joint. Joint instability as the result of an MCL injury begins the process of arthritis. The healing scarred ligament becomes longer and loose, which causes the joint to move and rotate differently.

The abnormal movement alters how the knee can handle loads and pressures placed upon it. The instability allows for more sliding between joint surfaces, and decreases the efficiency of the muscles. That leads to disruption of the underlying cartilage and bone, and boosts overall degeneration. The result is the eventual formation of arthritis.

Wear and tear, trauma type injuries, and anything else that affects one ligament of the knee, will affect the other structures of the knee. The MCL helps the knee to bend and twist correctly. But when it is injured, those dynamics are changed. MCL injuries usually occur near where the ligament attaches to the thigh bone at the knee.

The ligament attaches to a bony prominence called the medial condyle and assists in keeping the knee from hyperextending. When the MCL becomes weak and unstable, it starts a cascade of degeneration of the condyles. Since the medial condyle bears a lot of weight, the weak ligament boosts the wear on the bony condyle. And as the bone wears, the degeneration will also cause injury to the meniscus.

The cycle then continues as these bony attachments continue to degenerate, because the attached ligaments will lose their tautness and become even more loose and weak.

Treatment of an Injured MCL

The care of MCL injuries ranges from conservative to surgical measures. Surgery involves the cutting and removal of tissue, and since medial collateral ligament injuries often involve other structures, that would entail even more cutting.

It is important to understand that removal and cutting of knee structures adds to knee instability and to further degeneration of the knee in the long run. So avoidance of surgery would be preferred. What can be done then? And what are your options, considering the inferior healing of the MCL when left to heal on its own?

Regenerative Orthopedics, including Stem Cell Therapy, PRP, and Prolotherapy are treatment options available for MCL injuries. They help to provide healing of the entire knee. And they also allow for stabilization of the injured MCL. Studies have shown that these treatments are effective at increasing the strength of the ligament at the attachment site, as well as boosting the overall ligament mass and strength.

Strong Ligaments and Tendons Are Key to a Healthy Knee Joint

The key to healthy knees is strong ligaments and tendons. In the case of the medial collateral ligament injuries, co-injury of ligaments, and other involved structures in MCL injuries, the goal is to treat the whole knee with Regenerative Orthopedics. The treatment will stimulate repair, and strengthen the injured and weakened structures. New collagen, the material the ligaments and tendons are made of, is deposited at the site of repair.

The end result is a stronger, more stable knee joint. Rather than just allowing the MCL to heal on its own, Regenerative Orthopedics ensures proper regeneration of the ligament tissue, allowing for effective elimination of pain, the repair of the MCL injury, and a safe return to sport and activities.