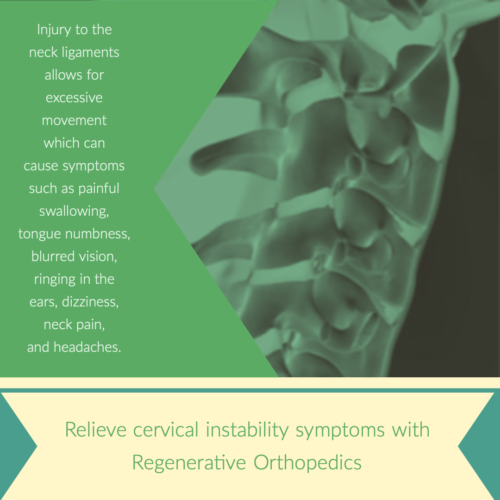 Looking for neck pain relief? Joint pain in the various joints of the body is usually caused by weakness in the soft tissue. And pain in the neck is no different. Relief is possible with non-surgical regenerative therapy.

Ligament weakness is very often the underlying cause of neck pain. And it can also be the reason behind the headaches, ear and mouth pain which often accompany neck pain.

Regenerative Orthopedics, such as Prolotherapy, have been proven to stimulate the healing of weakened ligaments behind this pain effectively. That’s great news because these treatments are an answer for those suffering from these ailments and often a way to find permanent pain relief.

When the ligaments of the neck are weakened, the instability that transpires in the neck is called cervical instability. Sufferers with this malady often experience a bunch of bizarre symptoms. In addition to neck pain, symptoms can include dizziness, visual disturbances, eye pressure, mouth pain, sinus congestion, tinnitus, and many others.

Instability of the ligaments of the neck is implicated in conditions like disc herniation, whiplash, cervicocranial syndrome, and spondylosis. When these ligaments are injured, they elongate and become weak. And that allows for excessive movement in the vertebrae of the neck.

The instability that arises in the upper part of the neck or cervical spine (C0-C2) can manifest symptoms such as vertigo, tinnitus, dizziness, facial pain, arm pain, and migraine headaches.

Also, a condition called vertebrobasilar insufficiency (VBI) can develop. VBI, with its associated symptoms of neck pain, headaches/migraines, dizziness, drop attacks, vertigo, difficulty swallowing and/or speaking, and auditory and visual disturbances, can develop in instances of upper cervical spine instability.  That’s because excessive movement in the neck can alter the flow of vertebral arterial blood.

As the instability worsens, so do the symptoms. Surgery to fuse the vertebrae of the neck is often recommended in cases of cervical instability. But those suffering from this condition should seek a consultation from an expert in Regenerative Orthopedics first. Why? Because this therapy can often prevent the need for fusion surgery. Plus, Regenerative Orthopedics can strengthen the involved ligaments and restore proper motion to the neck.

The Neck Is Unique

The neck is quite unique! The vertebrae in the neck are smaller and more mobile than all of the movable vertebrae of the spine.  And a high degree of mobility is required of the neck vertebrae to move the head through its varied range of motion.

These anatomic features are necessary for optimal functioning. But they also make the area more vulnerable to injury due to the demands placed upon the neck. The ligaments of the neck, which are the stabilizing structures primarily responsible for connecting adjacent bones, are especially vulnerable when trauma occurs.

When the neck is stable, it moves and functions normally while remaining in proper alignment and protecting the blood vessels, nerves, and spinal cord—injury to the ligaments changes this dynamic. And the injury leads to instability of the cervical spine. Add to that all of the stresses and loads placed upon the neck, and a cycle of imbalance is set in motion generating even more abnormal changes in the vertebral alignment.

Remember that cervical instability involves excessive motion between adjacent vertebrae, which causes excessive stress on the supporting ligaments and the nerve endings within them. The result is a cycle of pain and the associated variety of aforementioned symptoms.

Whiplash: A Type of Cervical Instability

Whiplash injuries are a common source of cervical instability. The sudden acceleration and deceleration during rear-end collisions cause the head to whip backward and forward severely. The backward “whip,” or hyperextension, is often associated with more injury to the soft tissue of the neck because it lacks the limiting effect of the chin meeting the chest in the forward “whip.” The excessive motion in hyperextension severely strains the involved muscles and ligaments and adjoining neck joints.

The ligaments of the neck are particularly vulnerable to injury during a whiplash event. And more notably, when the head is rotated at the time of the collision, such as when looking in the rear-view mirror. The ligaments that function to limit side-to-side head movement become susceptible to failure in this turned position, compromising their ability to limit motion.

The lack of a stabilizing structure can lead to further injury of the soft tissue and joint structures and the possibility of nerve injury and irritation of the sympathetic nervous system. The provocation of these nerve endings alters firing patterns and increases the sympathetic nervous system’s activation, resulting in a myriad of symptoms. Another condition fraught with these many varied symptoms is called Barré-Liéou Syndrome, or cervicocranial syndrome encompasses.

Regenerative Orthopedics strengthens weakened ligaments. It is effective in repairing and regenerating the ligaments and structures involved in cervical instability. And the treatment eliminates the instability and abnormal movement, which then resolves the neck pain and associated symptoms.

Cervical instability can be a frustrating and life-altering condition. But Regenerative Orthopedics is a safe, non-surgical option that can stabilize the neck. Plus, it can increase functionality in the person suffering from it and essentially help the patient get their life back.

We have written other articles on neck pain and cervical instability. Read them by clicking here.